I volunteer at the restoration shop at the National Museum of the United States Air Force (formerly the U.S. Air Force Museum), which is located in Dayton, Ohio. I've been honored by being selected to help restore the Memphis Belle, probably the most famous B-17 to serve in World War II. I'll keep you advised of progress on this and other projects and post a picture or two from time to time.

Here's me in front of the Memphis Belle, about March 2006

In the year since the above picture was taken, we've stripped most of the paint from the fuselage to inspect for corrosion.  We're leaving the nose art and mission symbols on the left side for the time being.  What you see behind me is all bare metal now.  The aircraft was stripped and repainted in the early 1970s, so none of the markings are original.  Our research staff noted numerous minor inaccuracies in the markings, which will be carefully reapplied in the future to match the orignal markings.  The interior is being "sandblasted" with a plastic media to remove chromate primer and corrosion.  The primer was added in the 1970s in an attempt to control corrosion.  It is not historically correct, since the interior originally was bare metal.  Despite the incorrectness, it may be repainted with the chromate primer for corrosion control.

One of our most exciting discoveries on the aircraft was hundreds of names scratched into the fuselage.  This was not the work of vandals over the years.  When the Belle was on its war bond tour, people who came to see this famous aircraft were allowed to scratch their name on it!  They were burried under a layer of paint, and will again be hidden when we repaint the aircraft.  While stripping paint, I discovered the word "victory" scratched in the fuselage just over the wing.  Since the area was covered by a fairing, this word most likely was scratched there by a production worker while on the assembly line.  It was exciting to have been the first person to have seen this in sixty-five years!!

Here is the word "victory," most likely scratched into the Bell's skin by an assembly-line worker

If you've already read my book Straight Up, you may recall an aircraft called the Curtiss-Wright X-19.  We reported that it was cut up for scrap back in the mid-1960s at the end of the program.  Well, guess what showed up at the restoration shop in early Feb 2007!!  Those scraps were pretty big, and apparently left at the Aberdeen Proving Ground in Maryland.  The props and wingtip gearboxes are missing, but the rest seems pretty-much there.  It'll probably be years until we start restoring it. 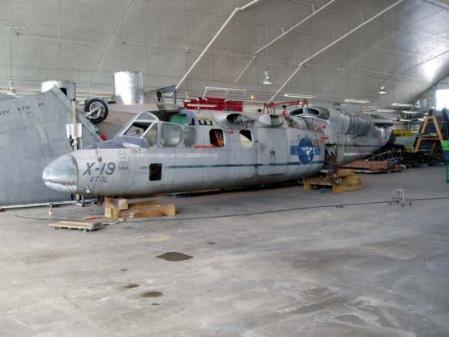 In September, 2007, the Bell XV-3 arrived.  This was one of the first tilt-rotor research aircraft, the great-granddaddy of the V-22 Osprey.  In my book Straight Up, I reported that it was at a museum at Ft. Rucker, Alabama.  It was fully restored by Bell Helicopter and looks as good as the day it was built.  I don't know the politics of how the National Museum of the U.S. Air Force acquired it, but I'm sure glad to see it here!  It currently is in the restoration shop and I don't know when it will go on display.  If you're planning a visit and hope to see it, please call the museum to find out if it is on display.

If you're ever planning a visit to the National Museum of the U.S. Air Force, which is just outside of Dayton, Ohio, call well in advance to schedule a visit to the Restoration Shop. The tour is by advance registration only. You can see us in action, preserving the Air Force's history. It's well worth the time.

We have the Northrop YF-23, which lost in a fly-off competition to the Lockheed F-22.

You'll also see the Boeing X-32, which lost to the Lockheed F-35 to become the United States' next V/STOL strike fighter.

By the way, nothing that I say about the National Museum of the U.S. Air Force or the restoration shop has been officially sanctioned.  It is all my opinion and observation, and does not carry any official endorsement nor does it necessarialy represesnt the opinion or policy of the Museum or its staff.